A New Perspective on Cancer 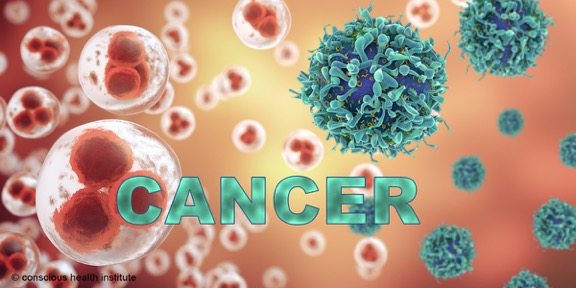 The body is made up of trillions of cells, which consistently grow, divide and die. Unlike healthy cells, cancer cells do not die—they divide out of control, due to damaged DNA, and can spread throughout the body. Cancer is the proliferation of malfunctioning cells.

If the blood, the living environment of cells, is unhealthy, the cells will be unhealthy as well. Cells become susceptible to abnormal functioning when substances enter the bloodstream and alter it. Low-oxygen and low-pH (acidic) states set up the conditions for cell malfunction and tax the immune system. Seventeen percent of the immune system is located in the digestive tract. What we eat has an immediate effect on blood and cell health.

Half of all men and one-third of all women in the United States will develop cancer. Worldwide, 7.6 million people died of cancer in 2008 (13 percent of all deaths) (World Health Organization). Those in developed countries are less likely to die of cancer than those in developing countries, but are more than twice as likely as to be diagnosed with it. The main reasons for higher cancer numbers in affluent societies are diet and exposure to tobacco and cancer-causing substances in the workplace.

Gender, ethnicity, and age can all help predict a person’s risk for various types of cancer. The strongest predictors are environment, lifestyle, and genetics.

Cancer has many causes. Up to 23 percent of cancerous growths in developing countries, and 8 percent in developed countries, are caused by infectious agents. Hepatitis B and C viruses can cause liver cancer. Human papilloma virus (HPV) can cause cervical and anogenital cancer. Helicobacter pyloribacteria can cause stomach cancer. Vaccinations, therefore, can be important to preventing certain cancers.

Hereditary cancerdevelops from one or more gene mutations passed from parent to child. The most common types are breast, ovarian, prostate, and colorectal. Tests are now available for these gene mutations. However, sporadic cancers—occurring by chance in individuals with no known genetic risk factors or family history—are much more common. Thus, environmental and lifestyle factors play a greater role than genes.

One recent, large study in the United Kingdom searched for links between cancer risks and 14 lifestyle factors: tobacco, alcohol, bodyweight, exercise, occupation, infections, radiation, reproductive history, post-menopausal hormone use, and certain foods. The 14 factors were found to be responsible for 42 percent of cancers. Unhealthy diet caused 10 percent of new cancers; tobacco caused nearly 20 percent. Tobacco is the world’s single largest preventable cause of cancer. Tobacco use accounts for at least 30 percent of all U.S. cancer deaths; 80 percent of those death are from lung cancer (American Cancer Society).

Frequent consumption of fruit and vegetables can reduce the risk of cancers of the larynx, lung, esophagus, stomach, colon, and cervix, by promoting healthy digestion and blood and balanced pH. Unfortunately, Western nations favor highly caloric diets rich in fat, refined carbohydrates, and animal protein. Combined with low physical activity, the typical Western diet is not conducive to healthy blood and immune function. Drastic lifestyle changes are needed for a significant decrease in cancer numbers.

Other than prevention, the second most effective approach is early detection, so treatment can begin early. Evidence suggests that recent declines in cancer mortality in some countries are due to early detection. Detection improvements include advances in imaging technology and better education about early symptoms. More than 30 percent of cancers worldwide could be cured if detected early and treated (World Health Organization).

Conventional medical treatment focuses on eliminating the cancer cells, not the cause. These treatments help many people live longer, but at great financial cost, with physical side effects and further deterioration of the immune system. The most common treatments are drug-based therapies (chemotherapy, radiation) and surgery. Immunotherapy shows the best promise; it’s safer and aligns more closely to a natural systemic approach, because it strengthens the immune system rather than only attacking cancer cells.

Complementary and alternative medicine (CAM), which use non-invasive, non-pharmacological treatments, are increasingly recommended by healthcare providers. Thirty-eight percent of Americans in 2007 used CAM (American Medical Association). Naturopathic systems, like acupuncture and other Chinese medicine, can help relieve pain and other side effects of drug-based cancer treatments. Numerous U.S. hospitals now offer therapies like meditation, yoga, and tai chi. But hospitals still use these as complements to drug-based therapies, not as substitutes.

Cancer is a complex disease with multiple causes. But one thing is certain: a healthy blood and immune system are key to cell function. Whether engaged alone or as a complement, non-toxic, natural approaches should be central to prevention and treatment. A diet filled with vegetables, fruits, whole grains, and beans is the #1 preventative method, and a key part of facilitating the body’s innate self-healing capacity.