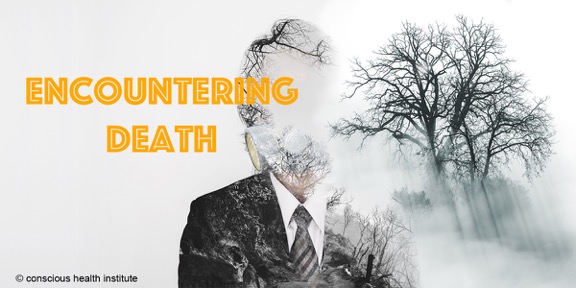 I want to step through the door full of curiosity, wondering: what is it going to be like, that cottage of darkness? – Mary Oliver

Death is a sleep where individuality is forgotten – Arthur Schopenhauer

Death is utterly acceptable to consciousness and life. There has been endless time of numberless deaths, but neither consciousness nor life has ceased to arise. – Adi Da

Understandably, most people don’t like thinking about death until someone close to them dies or a disease intrudes and threatens their life. We try to keep death at bay, as if it were the “enemy”. Our culture doesn’t have much place for death, though so much of life revolves around it.

In the past year, several people close to me have died. It has me thinking again about death. What is death? Only the breakdown and disappearance of the body? The complete absence of awareness of being? Awareness of the possibility of our own absence may help in understanding death. The primary awareness of our existence is fundamental to being conscious and alive. This recognition appears independent of body. What happens to that feeling of “I exist” without a body? Does it persist? While philosophers and religious thinkers have spent ages talking about mortality, humans generally spend a lot of time and money avoiding it!

In childhood, I had a recurring dream: I had the sensation of a trapdoor opening beneath me, and I was being sucked downward fast, like the wind pulled out of a hole in a pressurize plane cabin. It felt as if I was dropping out of my body-mind, out of me. I felt I was disappearing. I would wake up in a panic, crying. And my mother would comfort me. I realized then what deep fear existed inside me, part of which was about losing control. Was it death that I was afraid of? The dream felt so real, indistinguishable from waking life.

Sometimes, as a child, I would lie in bed wondering what would happen if I did not exist. I would rack my brain trying to think of my own absence. I realized it was impossible. How could one imagine not being? That would be absurd. I knew my body could be lost, but I doubted “I” could cease to exist at all. With the body dead, it seemed possible that consciousness could continue. I didn’t know, but I wondered and had an intuitive “faith”. I still had no answer, though, as to what death was.

Once, as a boy, I almost drowned while playing in the ocean in Normandy. I was pulled under by a powerful undertow, as small rocks rained down on me. With no sight of the surface, I struggled in a panic to come up. At one point, I suddenly seemed to be calmly observing myself from outside my body. It only lasted a second, and then I was overwhelmed again in the struggle to get out. Luckily, I did. Needless to say, I didn’t go back in the water! Here was another example of how fear was associated with the body, but awareness could separate from the body.

Falling asleep serves as a good analogy for dying. When we fall asleep, we seem to disappear. It happens naturally, without effort or fear and without us knowing. We don’t control it. We do not resist; we even welcome it! In deep sleep, the brain is barely active.  (Neuroscience is making great strides in studying this topic.) Where does our awareness go? Unlike in death, we participate in sleep knowing we will return to the same body upon waking. Only then will we realize we are alive!

As a medical professional, I’ve worked with people struggling with health issues for most of my adult life. I’ve always desired to help others overcome suffering. Yet it still sometimes takes great effort to distance myself from the situation. I used to consider death the ultimate suffering, but that has been changing as I learn more about the experiences of the dying and consciousness.

When you look into a dying person’s eyes, you usually do not see fear—pain, yes, but not fear. You see love for those around them, but also a graceful letting go—surrendering. To me, it seems that thoughts of dying, and identifying exclusively with the body, cause more suffering than the moment of death itself. Those around the dying person are more afraid than the person dying. You can see their love for the dying person, but also a struggle to hold on to them. If we can let go, we can help the dying pass on easefully.

“Death” remains a mystery. But knowing that fear is only a part of the body-mind, and that awareness may not be dependent on the body, brings a non-theological faith that makes the mystery of life something to celebrate.